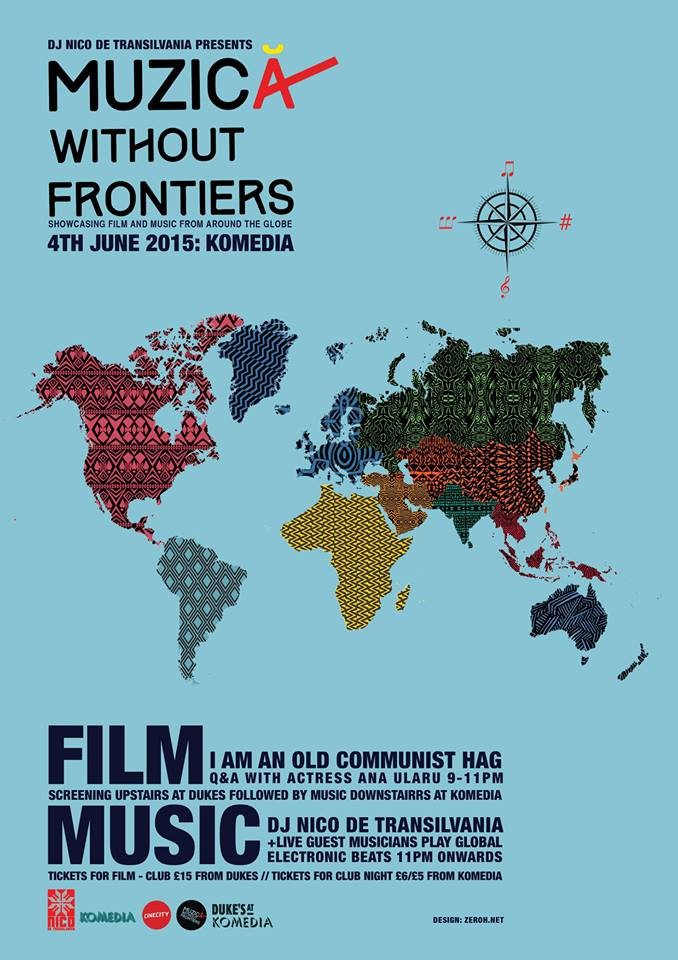 Brighton-based, Romanian artist, Nico de Transilvania proudly presents "Muzică Without Frontiers": a night exploring, through music and the arts, different cultures around the globe and the interconnections between humanity and the planet on which we live. This is the first of a series of nights that will be run in the UK and around the world starting from this year.

The evening will have two parts to it. The first part will be at the Duke’s at Komedia, where we will screen Romanian movie "I am an old communist hag" by Stere Gulea . The screening will be followed by a Q&A with actress Ana Ularu.

The second part will be at Komedia in the club/bar area with DJ Nico de Transilvania, your hostess for the night, who will be playing a set influenced by her travels around the world as a DJ. Nico is keeping true to her balkan roots, but combining these with the global/electronic sounds of the world.

Her special guests for the night are:

Jason KaliDas - Bansuri and Tabla player. He has studied Indian classical music for 20 years, learning from master musicians in the sacred city of Varanasi, India.

As a solo artist Jason performs Indian classical music and experimental fusions with electronica playing Indian scales using air controlled Moog synths. He works on many diverse collaborations within genres like live dance music, jazz and world fusion. As well as composing music for contemporary dance Jason works on projects linking music, consciousness, mediation and yoga.
ason had performed at the UN head quarters, saddles wells and many more.
Davey J Wavestar will be joining us with his Global Beats for a live set combined with Indian tabla and ragas.
And a special VJ show from Romanian theatre director and Visual artist Cristian Luchian.

This night is presented in association with CINECITY: Adventures in World Cinema

Tickets for the second part only from Komedia at £5/£6