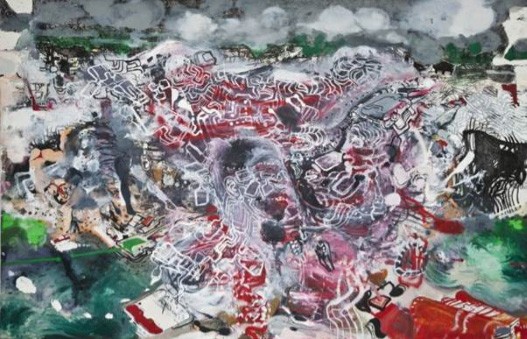 Saatchi Galley presents Bogdan Lascar's solo exhibition NEURO-EPICS.
Lascăr's artistic evolution has been influenced greatly by the Romanian revolution of 1989, when the dictator Nicolae Ceaucescu was toppled, ending 42 years of Communist rule. The revolutionary fervour that erupted on to the streets of towns and cities all over Romania, and which Lascăr experienced himself as an impressionable youngster, has informed his art in a very abstract, visual way.

According to celebrated writer and art critic Edward Lucie-Smith:
“A striking phenomenon in the visual arts, since the fall of Soviet Communism and that of the satellite regimes allied to the Soviet sphere, has been the emergence of new kinds of avant-garde art, visibly allied to the creative impulses that manifested themselves in the early years of the 20th century, but also subtly different, sometimes with the kind of tragic resonance one senses here. The idea may, quite literally, be that certain kinds of creative originality have to be paid for in blood – and need to be celebrated by being framed in gold.”

Bogdan Lascar is a recipient of the UNESCO Gold Medal for outstanding contribution towards advancing the arts. Lascar’s work is held in numerous public and private collections internationally including the Museum of Art, Constanta, Romania and the National Museum of Contemporary Art, Bucharest, Romania.