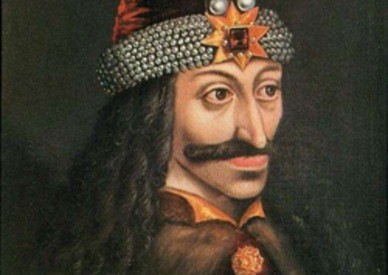 A fresh, imaginative take on Marin Sorescu’s revisionist examination of one of Middle Age’s most enigmatic heroes, "Vlad the Impaler", staged by intrepid theatre veterans Faynia Williams and Richard Crane, opens in Glasgow at the famous A Play, A Pie and A Pint on 27 April before a stint in the Brighton Fringe Festival between 5-10 May.

The play has unexpected humour laced with a disturbing insight into the roots of the divisions between East & West make for a tale of a thoroughly modern monster. Vlad will partake of his lunch with his impalees, as legend has it, while the audience partake of play, pie and pint.

Bafta-winning Iain Robertson is joined by masterful Jack Klaff, in the title role,  and intense Anna-Maria Nabirye in a performance based on Romanian author’s "The Third Stake" and produced by Brighton Theatre, with the support of Arts Council England and the Romanian Cultural Institute. The original music is penned by Romanian composer Vlad Maistorovici.

Playwright Richard Crane and director Faynia Williams have together won a record nine Edinburgh Fringe Firsts. Their company Brighton Theatre was the first to move from Fringe to Main Festival with Brothers Karamazov, which transferred to the West End and toured the world. Productions include Satan’s Ball, Gogol, and Vanity, published Oberon Books. Williams and Crane were the first Artistic Director & Dramaturg of the Tron Theatre. Williams is a BBC Producer (Pina Bausch, Joan Littlewood docs) & Crane is former National Theatre Resident Dramatist & Royal Court Literary Manager. They have just returned from British Council tour of South America.

VLAD THE IMPALER || By Richard Crane, after Marin Sorescu's 'The Third Stake'|| Directed by Faynia Williams